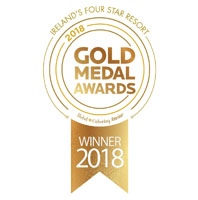 Now in their 30th year, the Gold Medal Awards are run by catering industry bible, Hotel & Catering Review, who recognise and reward excellence in hospitality and catering across Ireland.

The Gold Medal Awards were attended by over 600 glitterati of the Irish hospitality industry, encouraging and applauding hotels, restaurants, guest houses, spa and leisure facilities, event caterers, as well as individuals and teams, achieving the highest standard of product and service in the industry.

This year The Gold Medal Awards had over 550 entries, across 33 categories as well as 200 site inspections so Galgorm was up against stiff competition.

General Manager of Galgorm Resort & Spa, Colin Johnston comments ‘We are extremely proud to be recognised as Ireland’s Best Four Star Resort in the Irish hospitality biggest industry award The Gold Medal Awards. It’s a huge accolade for all the staff to be honoured as achieving the highest standards and excellence in hospitality’.

Hot on the heels of winning Gin Bar of the Year 2018 at the Bar of the Year Awards, this is another accolade for the trophy cupboard at the Resort that has already scooped a number of high profile awards this year including:

Galgorm Resort & Spa continues to invest in both its product offering and staff with exciting times ahead as they embark on a number of new developments opening in 2019. More news to follow.

Why Book With Us?

Book Your Stay
Why Book With Us?