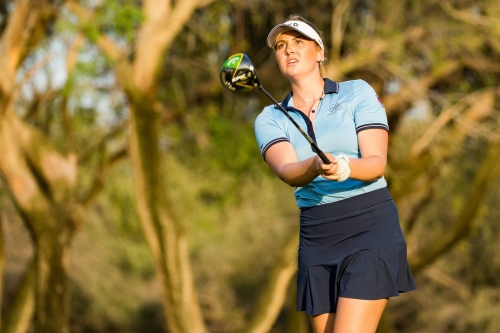 In less than eight weeks a little bit of history will be made when the ISPS HANDA World Invitational, presented by Modest! Golf gets under way at Galgorm Spa & Golf Resort where men and women will compete alongside each other and for equal prize money.

The World Invitational is a first of its kind event in Europe and organisers have paved the way to create this exciting new international tournament where competitors from over 30 different countries have already registered to play.

The event formerly known as the NI Open, and the best attended event on the European Challenge Tour, will now see some of the best professionals from the women’s game also compete over two venues, Galgorm and Massereene Golf Club.

Key names already registered to play include those featured in the top 10 of the Ladies European Tour (LET) money list with the promise of more to follow. There will also be a strong representation from Australia and Asia with further announcements in the coming weeks.

Germany’s Olivia Cowan will feature at the World Invitational and will look continue her good form this season. The 23-year-old finished tied third in Thailand last Sunday to add to the handful of other top 10s recorded earlier in the season.

Cowan’s compatriot Laura Fuenfstueck, Sweden’s Lina Boqvist and India’s Diksha Dagar are inside the top 10 on the ladies' European money list and will be on show at Galgorm from August 15-18.

“We have created the opportunity for women to perform on the same stage as men and compete for the same prize fund,” explained Niall Horan, owner of Modest! Golf. “I am delighted so many women professionals from around the world have already seized the opportunity to compete in the new World Invitational.”

Modest! have been involved in tournament golf at Galgorm for years. “We wanted to create something different, something unique, and with the help of ISPS HANDA we’ve achieved that through the World Invitational,” added Horan.

“Our company ethos is simple; we are trying to grow the game and to look out for the next generation of player. We achieved that in the men’s game with the hugely successful NI Open and now we have provided a wonderful opportunity for women professionals to compete alongside the men.

“With such an exciting new format and a packed schedule of events planned for tournament week, including live music acts and more, we continue to help grow the game and attract new audiences.

“I’ve said it before, but I actually think this is a bigger day for European golf than we think,” enthused Horan.

Other women players listed to compete at Galgorm include prolific winner Trish Johnson, who has won 27 times on tour and has played Curtis Cup. The English golfer has won around the world and will look to make her mark in Ireland.

At the other end of the spectrum, England’s Annabel Dimmock is making great strides in the early stages of her career. The 22-year-old won this season’s Jabra Ladies Open with rounds of 69, 69, 68.

“We are delighted to be partnered with ISPS HANDA who have an international reputation for supporting golf around the world,” explained Mark McDonnell, Modest! Golf Director. “This is such an innovative event which presents a unique opportunity for fans and supporters to come and watch the very best players from both the men’s and women’s game.

“The home crowds will also get the chance to see one of their own stars Leona Maguire compete on home soil. Leona is managed by Modest! Golf and though she is competing mainly in the States this season, she cannot wait to compete in front of home crowds at Galgorm.”

Maguire will be joined by the fellow Irish player Stephanie Meadow who will also make the trip across the Atlantic to tee it up in the $500,000 event.

“We are delighted to bring a professional women’s tournament back to Ireland after so many years without one. The World Invitational promises to be a great event and now spectators will get the chance to witness the stars from both the men’s and women’s games,” added McDonnell.

Tickets for the World Invitational are already selling fast. Advanced ticket sales can be made at worldinvitational.golf where spectators can take advantage of the early bird offers and be part of another exceptional week for Irish golf.