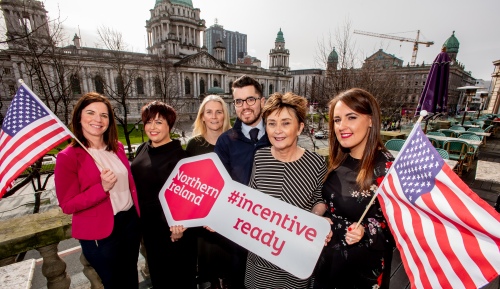 Tourism NI and a delegation of representatives from the meetings and incentives market which targets business related travel will head to New York this week for a programme of promotional activities including sales calls, educational sessions and networking with leading North American tourism buyers.

The highlight of the week will be Successful Meetings University, a three-day event in New York from 24 - 26 March, when the delegation will have the opportunity to network with one hundred and ten buyers representing an economic value of £104 million of international travel programmes annually.

Northern Ireland is fast becoming a destination of choice for the meetings and incentives market. In 2018 Belfast won Best Event Destination and the ICC Belfast won Best Venue 2018 at the Conference & Incentive Travel (C&IT) Awards. This was followed swiftly by the announcement that Belfast would host the prestigious 2019 C&IT Agency Forum.

The meetings and incentives market is a key priority for the future growth of tourism in Northern Ireland, representing a spend per visitor almost three times that of the average leisure visitor.
Tourism NI will also host an exclusive Northern Ireland trade evening at The Dead Rabbit in New York, one of the “World’s Best Bars”, in partnership with Hosts Global Alliance, who last year took their global travel event to Belfast. Owned by successful Belfast businessmen Jack Mc Garry and Sean Muldoon, the event will see a select group of 25 buyers enjoy a busy evening of Irish food, drinks and entertainment with the opportunity to win an incentive packed trip to Northern Ireland.

Joanne Taylor, Business Solutions Team at Tourism NI said; “This is the first time that Northern Ireland is represented at the SMU International. With up to seventy five pre-scheduled one-on-one business appointments planned for NI trade at the event along with three days of additional sales calls prior to that, we are excited about the potential business this volume of networking with such an influential group of buyers can bring.”

Travelling to New York as part of the Tourism NI delegation, Caitriona Lavery, Group Sales Manager at Hastings Hotel Group said; “The rise of the incentives market in Northern Ireland has been a major boost to corporate incentive bookings at Hastings Hotels. With the arrival of these higher spending guests at traditionally quieter times of the year, it has helped us to sustain existing jobs as well as create new roles, whilst also having a wider impact on the local economy and tourism in the area around our hotels.”

Why Book With Us?

Book Your Stay
Why Book With Us?