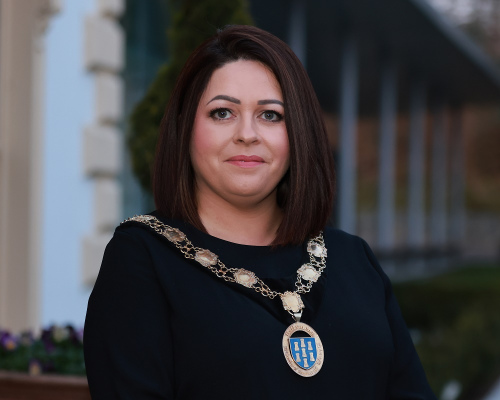 Ballymena Chamber of Commerce Elect a New President at its AGM

On Wednesday evening Ballymena Chamber of Commerce and Industry held its annual AGM at Galgorm Resort. At the AGM Leigh Heggarty, Galgorm Collection's Business Development Manager was elected as the new President of the Chamber.

In his speech the outgoing President, Councillor Eugene Reid said how honoured he had been to have served as Chamber President for the preceding two years. Eugene said ‘The last two years have been some of the most difficult for our communities and our businesses. These have been unprecedented times and as a Chamber we had to adopt new practices to meet the challenges posed by the pandemic. I must also say that our businesses have shown remarkable resilience and our local economy remains strong a testament to the strength of our local entrepreneurs’. Eugene then went on to thank the members of the Management Committee who had given up their free time to attend meetings and provide as much support as they could to Chamber members. Eugene went on to say, ‘Leigh Heggarty has extensive business knowledge accompanied by a great deal of common sense – I know Leigh will be an excellent President and it is my honour to formally propose that Leigh becomes the next President of Ballymena Chamber’ This proposal was passed unanimously by those attending the meeting.

In her acceptance address Leigh said ‘It is an honour to be elected as President of Ballymena Area Chamber of Commerce and Industry’ Leigh thanked Eugene for his leadership during such a difficult period and she knew that he had given up a considerable amount of time to not only lead Chamber but to ensure Chamber’s members received support during the crisis created by the pandemic.

The new President continued ‘Born and bred in Ballymena my passions are business and tourism and I’m very fortunate that my career path has afforded me the opportunity to pursue both.

Ballymena has always punched well above its weight in terms of business. The manufacturing heartland and market town has consistently showed its resilience and determination to succeed. Wrighbus now owned by Jo Bamford continues to expand into new areas throughout the world, creating more local jobs.

Galgorm Resort have invested heavily to establish the Resort as an award-winning international and world-class tourism destination, remaining firmly focused on investment and innovation attracting major events such as the Irish Open and ISPS Handa Golf events to the borough. I believe that organisations such as the Chamber play an important role, not just as the voice of the business community, but also as a mirror to society. We as a Chamber can reflect not just the concerns of our members, but also those of society as a whole. My personal goal is to set up more stakeholder engagement with government departments and local authorities and show that Ballymena is a great place for business, it’s a great commuter town, very accessible, we have excellent educational establishments providing our children with skills that our businesses require and we are a world class tourism destination’.

Leigh then proposed Mark Wiggins, Power NI, as her Vice President and this was also unanimously passed by the attendees. Mark stated ‘It is a privilege to take on this new role. I know we have a Management Committee who are committed to working hard to support and grow business in the area and I look forward to working with Leigh and the Committee to drive Chamber and ensure our members are at the heart of the economic recovery as we exit the worst excesses of this pandemic’

The meeting closed and attendees were given the opportunity to chat over coffee and tea and to liaise with the President and members of the Committee. This is the first in a series of events being organised by the Chamber in 2022 which will include a range of business breakfasts together with its two showpiece events – The Charity Golf Day in aid of the NI Hospice and Children’s Hospice (which raised £25,000 in 2021) and The Ballymena Business Excellence Awards.